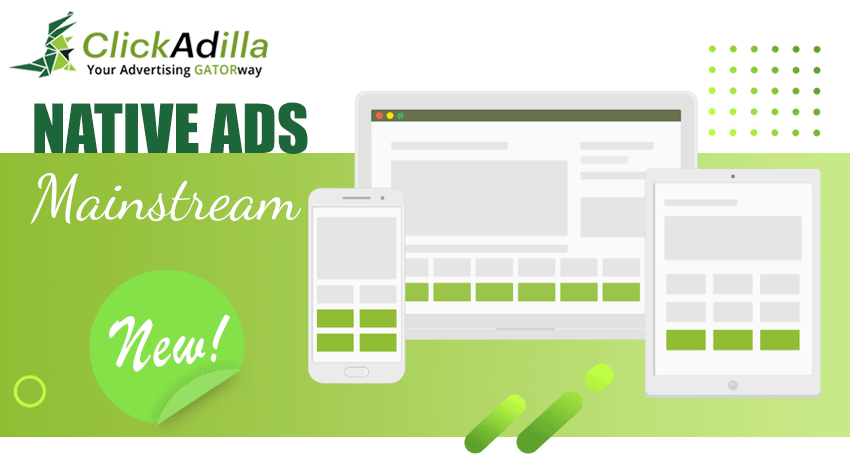 What are native ads

In a nutshell, Native ad format is a banner with a title. It imitates website's content and is designed to fight banner blindness. Website visitors look at such types of ads 50% more than to regular display ads. Accordingly, CTR is much higher.

Advertising is located in a special area and usually consists of 2 - 5 blocks.

Each block has two elements:

Native ad format works on all devices: desktop, mobile and tablet. Mobile native advertising content is similar to desktop and tablet versions. The main difference is in user behavior on these devices. People are more likely to use desktop computers in the office or for work activities, and mobile devices and tablets for personal use.

Introduced back in 1994, banners have long been the only display ad format. The very first banner was 468x60 in size and was a simple hyperlinked image. Over time banners evolved to different sizes and shapes. Web designers have developed animated, video, interactive and other forms of banners (Instant message, interstitial). However users are tired of such intrusive display ads and stopped noticing her. Consumers have learned to ignore content that resembles ads, is close to ads, or appears in locations traditionally dedicated to ads. Such users' behavior and use of ad blockers pushed advertisers to create new ad formats. Therefore, new ad formats were not long in coming.

Banner blindness and use of ad blockers pushed advertisers to use new ad formats.

The native format appeared later around 2011. Since then, it has overtaken traditional banners. According to the study of Sharethrough and IPG media, website visitors looked at  native ads 52% more frequently than banner ads. As a result purchase intent is 18% higher. According to eMarketer advertisers will spend in 2021 at least 60% of their budgets on native advertising.

Native banners appear as part of a website's content. As we mentioned above, native ads consist of an image and title. The last one further increases user engagement and gives the advertiser additional space for creativity. By clicking on native banners, users are more interested in specific topics. Native ads are marked with the ‘Ad’ label or as sponsored content. This way a user isn’t being deceived, and clearly understands that it is an advertisement.

Visibility, low prices and user experience are undeniable benefits of native advertising. But we cannot say that banners are bad, they still work and this case study proves it.

Banners, like any other format, have their own specifics, which must be taken into account when launching an advertising campaign. For example, mobile native ads are ideal for mobile games and webcam offers, while mobile banners perform better with men's health and gambling offers.

This infographic shows the best performance verticals for banner and native ads. Ad formats are divided into desktop and mobile devices, since it also has a direct impact on conversion rate. Please note that verticals not mentioned here can also be effective.

How much does native advertising cost?

In ClickAdilla are available CPC and CPM models

The actual bid depends on the competition on selected targets. Check traffic volume and costs in Traffic chart.

💡 We recommend starting with cost per click model to test users’ responsiveness. In case your ad shows CTR higher than 0.1% it makes sense to buy traffic for impressions.

Don’t hesitate to contact your account manager on Skype. He will give advice on how to set up an effective native ad campaign.