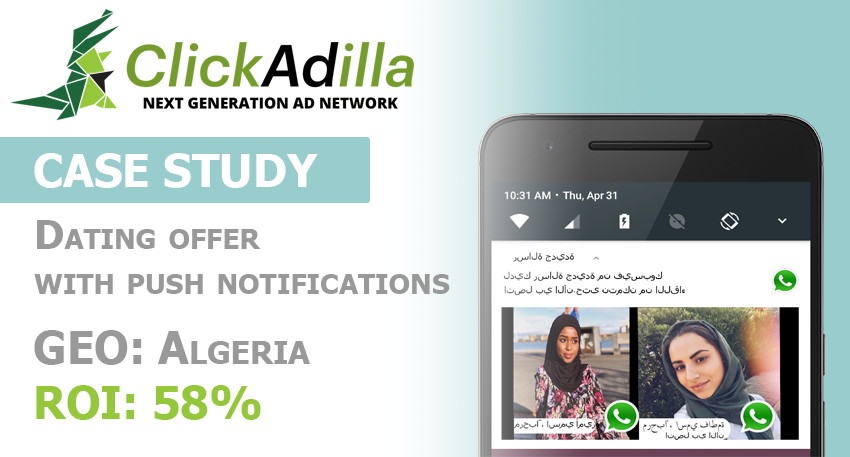 The following case was provided by one of our clients within the frames of the Case-study competition.

Hi, I’m Nick and this is my first case-study. I’m not a severe affiliate marketer, so I didn’t have a lot in financial resources. But I had an idea of how to increase these funds.

I opted for the Hypercentage network, because there are a lot of GEOs and suitable dating offers. The manager provided me with following countries and carriers:

Then, I was looking for traffic. My attention caught ClickAdilla network. The amount of traffic was decent and traffic prices were very attractive: CPM and CPC from $0.003. In addition, I would get a good bonus.

The manager provided me with some banners and expressions in Arabic language. As for the offers, I’ve tested these:

I used the default landing page:

The first and the second push creatives showed CTR 0.26, but conversion wasn’t so good, just 0.76

After that I’ve added campaigns on Tunisia, Egypt, and Morocco with similar creatives.

As for devices, only mobile.

Here is what I’ve got:

I was surprised by clicks from countries not relating to target. I asked ClickAdilla for the explanation and they told me that these clicks came from proxies, ad verification tool and, moderators. Obviously, you only pay for clicks from targeted countries.

So, back to the earnings, I didn’t get a single conversion from Morocco. Campaigns on Tunisia and Egypt have shown low efficiency. Campaign on Revshare model got me less money, than CPA.

As the result, I lost $13.74, but I realized that I needed to launch a campaign targeted on Algeria on CPA model.

I launched campaign with the offer Adult Stars - Algeria - CPA. The main difference from the Adult Stars - Universal - CPA is in payment. You get $0.4 per conversion instead of $0.27.

I’ve created new push creatives and updated them 4 times while campaign run. These 2 had the highest conversion rate from impressions to clicks and from clicks to calls.

Texts were also in Arabic. For translation I used Google

and ready expressions from the list of my manager.

To increase conversion rate I set up limits on the morning time and selected only Premium sources.

In some days CR was high, up to 1.8. Sometimes the conversion went down to 0.6

Average CR from impressions to clicks: 0.12

From clicks to conversions: 1.19

So, finally I increased funds, got $100 bonus on advertising and came to the following conclusions:

I’ll continue to look for new strategies and hope that my case will inspire newbie affiliate marketers to test dating offers like these. In case an ad network’s base is constantly updating and growing, this case can be repeated after a while.